Back in April i think, I got a call from my rehab worker asking if he could nominate me for the
Guide dog of the year awards
Which celebrate the extraordinary work of not just guide dogs, but also fundraisers and volunteers. It is sponsored by Specsavors. There are 7 catagries this year.

Apparently our local team were asked if they would like to nominate anyone and my rehab worker suggested me because of all the fundraising/speaking/talks to applicants i do. I was nominated for the young persons achievement award.

So apparently the person doesn’t have to be told that they are being nominated but my rehab worker wanted to check with me first. I felt really privilidged to be considered for such an award as i thought that i didn’t do that much for the organisation.
So today i got an email saying that i was to get a “special commendation” certificate but wouldn’t attend the event itself. I will paste the email below. I would like to thank all of the Northern Ireland team and especially to my rehab worker for nominating me.

I am pleased to let you know that you were nominated by Steve Andrews in
the Young Person’s Achievement category of the Specsavers Guide Dog of
the Year Awards, our annual award ceremony which recognises the
incredible work of our life changing guide dogs and also the people that
make these amazing partnerships possible.

The competition was very stiff this year and we received scores of
nominations over the seven categories.

I’m sorry to say that yours wasn’t one of the nominations the judges
selected to take forward to the final. However, we were very impressed
with your nomination and will be sending you a special commendation to
recognise your achievements.

I will arrange to post your special commendation certificate and you
should receive it in late July.

Thanks again! Good luck to anyone else being nominated or attending the event including guide dogs themselves!

Yesterday was the 2012
Ballymena show
Which we again were fundraising for guide dogs.

I decided to work Ushi before i was collected, but by the time we got back Ushi was very hot. It was about 23 degrees Celsious.

So when we got to the show it was very hot indeed for Ushi. She pulled quite a bit when we got out of the car even though i had her harness on. I was informed that there was a wallaby opposite us! I would have thought it would have been too cold for it to be kept over here but apparently not.

Ushi spent our two hours just lying under the table. She was so warm. Alot of kids from Carninny primary school came up because they recognised Ushi! At least they did pay attention that day lol.

A woman came up to us who had done a
Go walkies event
Last year and had remembered ushi. She is going to volunteer at the Antrim show which will be in a couple of months i think. So hopefully she will volunteer in the branch at other events.

One of the schools my friend did a talk to, one of their teachers came up to tell us that they were putting posters up, and sending letters home to parents to get them to sign the petition for guide dogs food to be excempt from Vat. This is brilliant news! She also got a local MLA involved. So that sounds very promising.

By that time it was time for me to go home. Ushi spent the rest of the day sleeping.

I personally think it was too warm for dogs, but then again it’s the dogs who bring in the money so we couldn’t really not take them.

Later on my rehab worker decided to have a b b q for anyone who wanted to come out of the branch. So me, the treasurer and another volunteer went along. It was a great nights craic and we didn’t leave until 10 o’clock.

So it was quite a good day apart from it being too warm. Ushi didn’t attend the b b q and got to chill at home.

Win A Slow Feeder Dog Bowl From Puppy In Training

I came across this in a tweet the other day.
Puppy In Training
Are giving away a free slow feeder dog bowl.

Anyone who has a lab type dog, or a big dog in general probably knows about dog Bloat. This is a pritty serious condition. It can be caused by dogs eating too fast. I’ve never (touch wood), had the problem of Ushi eating too fast. She is very patient and will wait at least a minute before eating after i’ve blown her whistle to eat. (Our dogs in the UK only should eat if they hear the whistle blown three times). Plus she eats super slowly, and chews every little bit. I hope this never changes in her as i would hate for her to get bloat.

I was thinking more of
Jess and Glacier
When i started writing this post, so i hope she reads this.

The gang at Puppy in training reviewed this slow dog feeding bowl, and
Here is the vidio review
They did, and the compitition post is
Here

All you have to do is leave a comment on the post above saying why you think your dog could use one of these. A number generator will select the result. Hurry though as i think the deadline is soon.

It sounds useful if your dog eats fast.

Remember i mentioned about
Me being in the paper
Well the article was published in the 8th May edition. Unfortunately when we were doing some of the photos we got some of Ushi and Della playing. We thought this would be good because we could get the message out about the fact that our dogs are just dogs at the end of the day. Those photos weren’t put in because…the editor said you could see their teeth! I think this was totally stupid because when they are together they wag away and you would have known just to look at them that they were playing. So we took a photo of them after a free run instead.

The pictures were put in on the facebook page for the guardian but i couldn’t access the article. I emailed the editor and he so kindly got one of the reporters to send it to me. I’ll post the text then the photos. I’ve a couple more pictures to get but i’ll add them when i get them.

Highlighting the vital work of the Guide Dogs Association
Meet Della and Ushi –  guiding lights in the darkness! 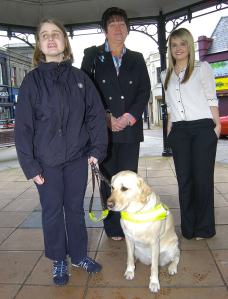 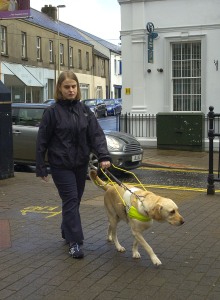 Which is another client.  I’m using the free version but don’t know how long i can for.  I can’t really read the eddits so i might have to check later.

I’m just testing this to see if it works. I’m using a desktop client.

I could use the web and i have no problem doing that, but i can post as well as be on the web doing other things. I could post by email, but for some reason the email puts in extra code when you do links. It did with blogger anyway.

Today i had a branch meeting for our guide dogs fundraising branch. It was in Cushendall.

I had decided that the next time we would go to Cushendall, I would take the bus if i was feeling adventurous. This was the first time we were at Cushendall as we wanted to make sure the weather was good as when it is icey it is quite hard to get to as the road is quite windey.

So this morning me, my dad, my sister and me set off to get to our nearest bus stop. Unfortunately at the stop there is no way you know that you are at the stop as there isn’t even a pole there. The stop is half way up the wall! So if i was ever doing it on my own i don’t know how we’d find it. Dad and my sister were heading to Glenariff forest park which is near Cushendall.

There was a bus that passed and we thought it was our bus but it turned out it was a school bus. We got on the next one though.

It was a very rattley bus and each time we turned a corner it made little Ushi slide on the floor.

When my dad and sister got out i was panicking in case the bus didn’t stop at my destination, but it did and my friends mum was waiting for me.

Since we had a little time to kill before the meeting, we decided to take the dogs for a run. Luckily i had braught my free running stuff just in case. We first of all let them run around the garden for a while before getting in the car to head to where we would run them.

They had a great time just running around. I noticed they stuck together and wouldn’t leave each others side near enough. When I called Ushi back, Della wasn’t far behind and vice versa. On the way Della started to whine because she knew where she was going and knew we were near the sea, so Ushi started to copy too. We didn’t let them go near the sea though as we didn’t fancy the smell of we dog.

When we got back to the house they still wanted to play lol.

The meeting was good and Ushi just slept because she was so exhausted. We stayed for lunch afterwards. I was going to get the bus back but we finished early so i figured there wouldn’t be much point in waiting around when the branch organiser was going home the same way anyway.

I feel though that i have made some big steps. It’s so good to do something totally independently. We were talking about going up again just to let the dogs have a run together. I can’t wait! If only the busstop was slightly better though.

On another note, the fundraising coordinator asked me if i would like to try surfing at some point. The Derry branch are organising it and they are talking about it being a sponsored event. The guy who mentioned the surfing to the Derry branch does it for people with disabilities and it would be an adapted board and everything. So i said i would give it a try. I’ll let you know though when i have more info on that. It sounds very exciting though!

Oh and i forgot to say I was a bit worried about how Ushi would react to my friends cats. When she is in harness she will sniff but i don’t think she would do anything to a cat. My friend said though that the cats she had had disappeared but there was the neighbours cat who lurked about. It stood in front of Ushi and she didn’t care! So i was glad about that!