← A Year Qualified With Vivvy
Behind The Half Marathon Finishing Line → 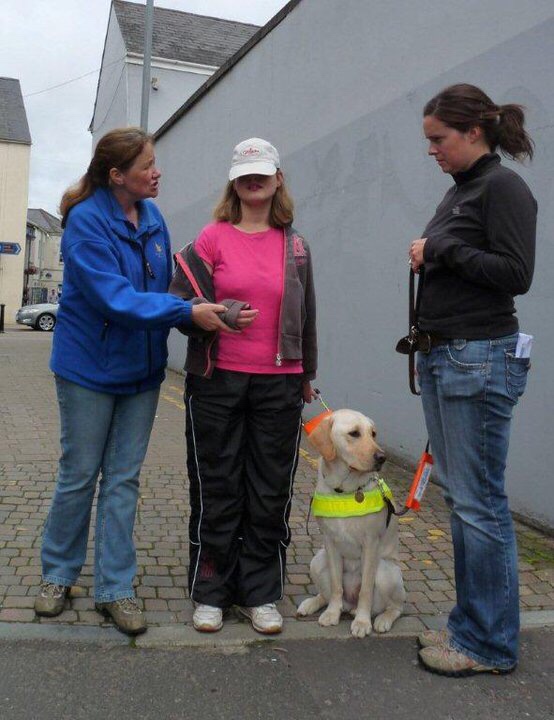 this is a post i really wasn’t thinking i’d have to write for a few more years yet but unfortunately that wasn’t to be.

Back in July, i got a message from Ushi’s puppy walker to say that she had been a bit sick and that she was going to the vets for blood tests and scans just to make sure she was alright. I wasn’t too worried as i figured that the vet was just making sure she was okay. The vet had said that Ushi was a little anaemic, but they thought it was due to her being a bit under the weather. When they went to do the scan, however, they could not find a cause for her Anaemia and sickness and her blood work had returned to normal.

Everything seemed to get back to normal with her after this, and we put it down to just a scare or a random bug. I visited her at the end of July and she was her little gentle self. She just mooched about, but that was generally Ushi. When i petted her, she felt thinner than i remembered, but i told myself that she was out running and loving life every day so was keeping the weight off. Her coat felt a little courser too, but again, i put it down to her just loving life and her age. We had a really lovely time and it was great that Vivvy got to meet Ushi and they got to have some fun together.

Ushi was grand for all of August, until i got a message on the 13th September telling me that she had been rushed in to the vets in the early hours of he morning. She was being sick and shaking and panting which was not like her at all. The vet gave her ant acids and anti-sickness medication and referred her for more tests. Her blood work was showing up again as Anaemic, but that was put down to her being sick. She was sent home and enjoyed some pasta which she kept down. She started shaking and panting again in the afternoon, so was taken back in again. The vets gave her yet more injections, and sent her home again.

On the Saturday morning, she hadn’t eaten or drank anything so we were getting worried. She needed to be carried out to the car, so i was thinking the worst. She was hooked up to fluids straight away and tested positive for Pancriatitis. The next 24 to 48 hours were critical.

Thankfully, by the Sunday, she was showing signs of improvement and was starting to eat again. She was sent home on the Monday with different tablets to take and would see the vet the following Friday. The vet wasn’t sure what was causing her Pancriatitis and said that it could just be something that older dogs got from time to time.

Ushi was up and down over the next few days, and was still being sick but the vet said that her body could just be taking a while to recover from how seriously ill she was. On her better days, she was doing well, or so we thought and even managed a trip to the beach.

Unfortunately this weekend she stopped eating again and ended up with another bout of Pancriatitis, but it wasn’t as bad this time. She was still admitted to the vets again for fluids. The vets wanted to rule out doggy Addisons disease as a last resort, so they kept her in to test her for it. The tests came back as negative, so it was time for a serious discussion as to what to do next. This time, when the vet scanned her, the area around her pancreas was calcifying, which suggested a tumour. The vet had offered to do exploratory surgery to see if they could find anything, but they wouldn’t wake her up from that. It was decided that the kindest thing to do was to put her to sleep as there was nothing more that could be done.

So yesterday evening, my beautiful Ushi went to sleep in her puppy walkers’ arms for the very last time as this was by far the best option and she was clearly suffering. R.i.p my beautiful, cheeky, stubborn, wonderful first guide dog and friend. We had many, many adventures throughout the seven and a half years that she worked for. She helped me grow in confidence, from the shy 20 year old, to the girl who was never in the house. We attended many meetings, coffee shop visits, walks for the love of walking, met up with friends, tried new things, traveled on trains and busses, won the young persons achievement award in 2013, amongst many brilliant things. She was so adaptable, and nothing phased her apart from flies. She really didn’t like flies, or flying, for that matter. She coped with everything else though and even though i struggled with her stubbornness, we made our partnership work. I really do think that it is because of Ushi, that i can adapt and change my behaviour to help Vivvy with her reassurances and suspicions . If it wasn’t for Ushi, i probably wouldn’t be the guide dog owner i hope i am today.

I would like to thank her puppy walker and family for agreeing to take her back in retirement. She really landed on her paws and had a fantastic life. I am glad she wasn’t ill until the end and glad they knew when it was time for her to go. I am glad they kept me informed and made me feel like part of the family even though i couldn’t be there for her at the end. But she was surounded by nothing but pure love when she needed it most. Thank you also to the vets for caring for her so well.

4 Comments on “RIP My Beautiful Ushi”